A downloadable game for Windows

Construction Tasks ! is a simple Game done during the Gosu Game Jam 3 by Guillaume Quillet aka "Bestguigui".

It mimiks the game series Cook Serve Delicious :
- a series a tasks is poping on the left part of the screen*

- to handle one, you have to select if using the appropriate key number (numpad is also compatible)

- then, you have to enter a series of inputs to provide the appropriate action

- when the sequence is correct, the task is completed, gives some points and is removed from the list

- tasks are available only a little time and then start to scroll to the left. If it goes all the way left, you'll have some malus

- reach a certain score to get to next phase

- finish all phases to beat the game.

Game was developped using the Ruby programming language and the gem Gosu only. You can run the script from the ./init.rb file if you have Ruby and Gosu gem installed, or use the provided .exe file on Windows. Please note that I used Ocra to generate this executable, which can be considered as false positive trojan by Windows Defender. Consider using the ruby only version if needed, or you'll have to autorise some exception from Windows Defender.

THANK YOU for playing !

You can launch directly the init.rb file if you have Ruby installed, along with the ruby gem Gosu. Otherwise, you can simply launch the .exe file. Please not that it can take a couple seconds to launch that way, because of the interpreter being cached. 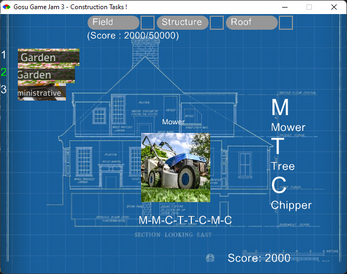